YOUR WATER AND WASTEWATER RATES

Water and Wastewater rates are regulated by the Missouri Public Service Commission (MoPSC). These rates are based on the actual costs of water treatment and delivery, and wastewater collection and treatment.

To establish new rates, Missouri American Water (MAW) files an application with the MoPSC. This begins an 11-month rate review process. MoPSC Staff and other parties study and evaluate the appropriateness of MAW’s costs of construction, maintenance, operation, administration and financing. Once the studies are complete, MAW, MoPSC Staff, and other parties present any differing conclusions before the MoPSC. After evaluating all of the evidence and information, the MoPSC issues a final decision establishing rates they deem just and reasonable.

Rates can vary based on the cost of providing service in each of the communities we serve. Missouri American Water is proud to provide safe, clean, reliable and affordable water and wastewater service to nearly one in four Missourians. Please see below for the water and/or wastewater rate for your community. 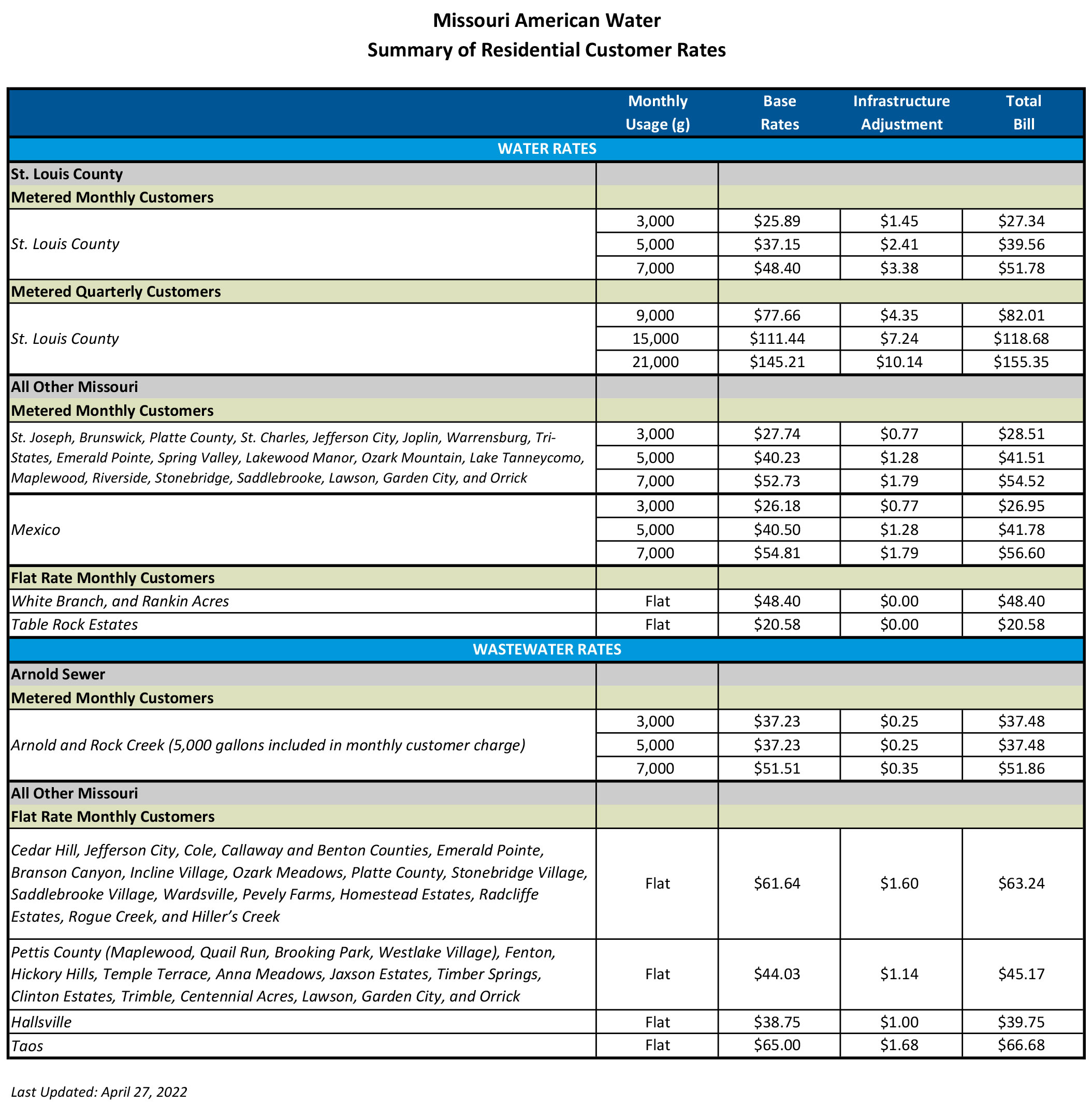 The Infrastructure System Replacement Surcharge (“ISRS”) is an important program that benefits customers by funding the efficient replacement of aging water pipes.

What is ISRS?
ISRS is a program that enhances Missouri American Water’s ability to perform water main replacement and relocation projects in St. Louis County. Customers in St. Louis County will see a small bill adjustment, based on water usage, included on their regular periodic bill.

The industry’s suggested replacement rate for water mains is 1 percent (based on a 100-year lifespan), which means that every 100 years, all mains would be replaced. Most water systems in the country are averaging a replacement rate of 225 years, which is insufficient to cover the expected lifespan of the typical water main. In St. Louis County, the ISRS program has allowed Missouri American Water to accelerate its replacement rate among the county’s 4,500 miles of water main to 125 years. This is still short of our 100-year goal, but is a step in the right direction.

How is the ISRS calculated?
The ISRS is calculated based on the level of eligible capital investment made Missouri American Water and expenses such as depreciation and property taxes. These costs are divided among St. Louis County customers based on the amount water each customer uses.

How much does ISRS add to my bill?
With the implementation of a new ISRS on October 7, 2021, a residential customer in St. Louis County using 6,000 gallons of water per month would pay an additional $1.42 per month.

What are the ISRS rates?

Do other states use ISRS?
At least 10 other states use a program such as ISRS. Most of these states are in the Midwest and Northeast, where systems are older and in greater need of replacement. Other states often refer to the mechanism as DSIC, or Distribution System Investment Charge.

Without ISRS, Missouri American Water would still replace the oldest and most troublesome mains in our system, but the work would be done at a much lower frequency because it would be more difficult for Missouri to attract capital. What this means is that many mains that are due for replacement may not be replaced in a timely fashion, and as a result, main breaks could increase in frequency.

Missouri American Water has invested more than $850 million to replace portions of its water main system in St. Louis County since ISRS began in 2003.

Prior to ISRS, the company’s annual investment in main replacement was less than $10 million. Since ISRS became law, Missouri American Water has been investing between $50 million and $80 million to replace water mains.

How old are our water pipes and why do they need to be replaced?
Some of the pipes in Missouri American Water’s distribution system are more than 120 years old! These pipes wear over time based on the pipe material, soil characteristics and temperatures, becoming susceptible to corrosion, leaks, and breaks. It is estimated that 2 trillion gallons of water is lost each year in the U.S. due mostly to aging, leaky pipes and water main breaks.

Replacing old pipe before it breaks again is important for several reasons: